Tremors Wiki
Register
Don't have an account?
Sign In
Advertisement
in: Characters, Sidekicks, Characters in Tremors: The Series

View source
watch 01:36
We're Getting Mutants in the MCU - The Loop
Do you like this video?
Play Sound 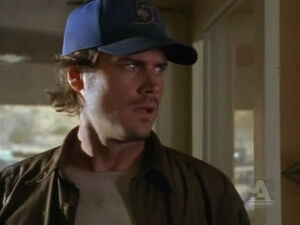 Tyler Reed is the deuteragonist of Tremors: The Series.

He is portrayed by Victor Browne.

Tyler Reed, the son of a strict, hard-bitten Air Force colonel who oversees bomb runs on the nearby Nevada Test Site, is in his mid-to-late-20s. Tyler even wears dog tags (these were seen in A Little Paranoia Among the Friends). Less cowboy and more hot-rodder, Tyler looks good in his engineer's boots and jeans with rolled cuffs. He's got a thing for everything NASCAR. Before coming to Perfection Valley, he was an aspiring driver working his way up the circuit. When he crashed his car he saw it was time for a career change.

Role in the TV series

He bought a local business, Desert Jack's Graboid Tour, Jack was apparently living in Vegas. After all, he's seen CNN: Look how well Valentine McKee, Earl Bassett and Grady Hoover made out running that ramshackle operation. Therefore, there must be another fortune waiting to be made from Desert Jack's tour business, it obviously "a real money-maker" (he charges $12.00 per person). He arrived in Perfection driving a '68 Dodge Charger that El Blanco buried upon his arrival when he stopped on the side of the road to take a picture of a Graboid warning sign.

But for all Tyler's big dreams and street-rodding skills he's a remarkably easy-going guy. Too easy-going for Burt Gummer, who criticizes Tyler for being unprepared for most situations. However, the truth is Tyler's quick wits, athletic grace, and NASCAR-inspired driving will prove to be valuable survival skills — for himself and his neighbors. He knows all there is to know about racing and vehicles -- his skills have been portrayed constantly throughout the series. Due to the series being cancelled, nothing is known about what happened to Tyler after Season One. Tyler nor any of the other Perfection residents are mentioned in Tremors 5: Bloodlines but its implied he and Burt had some kind of falling out as Burt tells Travis Welker that "I work alone." In addition, Perfection appears to be abandoned and demolished aside from Chang's Market which is occupied by Burt as seen in Tremors: A Cold Day in Hell.