Tremors: Shrieker Island is the seventh instalment in the Tremors movie saga. Also known as Tremors 7: Shrieker Island, the movie is an American direct-to-video monster movie directed by Don Michael Paul and produced by Todd Williams and Chris Lowenstein.

It is highly rumored that Shrieker Island is the final instalment of the Tremors saga; this has not been officially confirmed, however.

When a nature preserve in the Solomon Islands is infiltrated by Graboids, Ass Blasters, and Shriekers, two of the preserve's top scientists recruit Burt Gummer, monster hunter extraordinaire, to eradicate the infestation. While there, Burt picks up a potential new protégé and encounters lost love.

The wealthy owner of a bio-tech company, Avex-Bio Tech, Bill organizes a hunting party with a close friend and partner, Dr. Richards and their best hunter, Anna. The three travel to Dark Island — a wealthy island for elite hunting — where they plan to hunt down Graboids.

On the island nearby, Dr. Jasmine Welker and her colleague Jimmy begin experiencing abnormal seismic activity which they deem to be unnatural in some way. Intrigued when she witnesses Bill leaving the island, she, Jimmy and their friend, Ishimon, decide to investigate. Arriving on the island, the three are shocked and confused when they find a dead Graboid. The three are too slow to leave the scene, however, but quickly realise that the Graboid has given birth to Shriekers, which attack and kill Ishimon. Jasmine is aware of the existance of Graboids, and instructs Jimmy to find Burt Gummer. Shortly after, she learns from Bill that the Graboids have been genetically engineered, and are now more powerful and intelligent in the aims of increasing the enjoyment given during the hunt; she further learns that communications on Dark Island have been closed off.

Following his orders from Jasmine, Jimmy is able to find Burt, who has been living as a survivalist in isolation away from the government; Burt has no wish to have anything further to do with Graboids, however. Jimmy explains that Travis — Jasmine's son — is unavailable, therefore they will need his help with the Graboids. Initially reluctant, Burt eventually agrees to assist despite the troubles between he and Jasmine.

Having cleaned himself up after numerous years alone, Burt rallies a party to fight the Graboids. Bill arrives moments later and explains that 9it is his hunt, and that they should leave Dark Island well enough alone. Burt remarks that the Graboids have become an increasing threat with their enhanced strength, and now pose a real threat to everyone, not just those on Dark Island.

At Dark Island, the Shriekers have began killing members of Jimmy's hunting party. It eventually becomes clear that, like their parents — the Graboids — the Shriekers are genetically enhanced too and possess the ability to use their screams as weapons; they use this ability to kill numerous members of Bill's party individually. Jimmy and Jasmine are saved, however, moments later when Burt arrives and takes out the Graboid and the Shriekers. With two Graboids remaining, Jasmine returns to her research lab only to find that one of the Graboids had beaten her to it. She theorizes that this Graboid is much more powerful than they realized, and in turn, Burt pleads with Bill to cancel the hunt and turn the communications back on. Bill refuses, shooting Burt and his party with a tranquillizer and locking them in the lab.

Burt and his team awaken in the lab and are able to escape the zip ties using the boots lent to Burt by Jimmy. Outside of the lab, however, Bill is met with the most powerful of the Graboids, aptly named "the Queen". This is enough to scare Anna (one of Bill's team) who quits the hunt momentarily.

Anna frees Burt and his team from the lab, and they try to convince Bill to end the hunt. Bill is killed moments later, however, when he is devoured by the Queen. Burt and the team conceive a way to lure the Queen to her death, but the plan goes awry, and Burt is eaten by the Queen in the process; the Queen dies moments later.

Having died during their plan, the others make a memorial site for Burt, where they each leave something to remember him by. 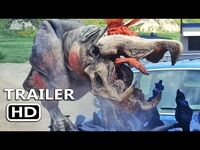