Lela Lee is the actress that replaces Susan Chuang, who wasn't available to reprise her role for Tremors: The Series as Jodi Chang.

Lela Lee (born 1974 in Los Angeles, California) is an American actress and cartoonist, and the creator of the animated cartoons the Angry Little Asian Girl, Five Angry Episodes and the comic strip Angry Little Girls.

Lee, the youngest of four children, spent her earliest years being raised on a chicken farm by her grandparents in Korea. A few years later, she joined her family in Van Nuys before they moved to San Dimas, and cites her traditional Korean upbringing while growing up in an area with few other Asian Americans as a central influence in her work.

Angry Little Girls was developed from Kim, the Angry Little Asian Girl, a character she developed in 1994 when she was a sophomore at UC Berkeley. She developed the character after attending Spike and Mike's Sick and Twisted Festival of Animation with a friend. In an interview, she said, "I came out of there, I was really mad. 'I did not enjoy any of those cartoons. They were sexist and racist." Her college friend challenged her to make a cartoon about herself, so she did. That same night after getting home from the animation festival, Lee stayed up drawing with typing paper and crayola markers and made the first episode "Angry Little Asian Girl, the First Day of School."

Four years after initially creating the first episode of the Angry Little Asian Girl, she created four more, and sent the five episodes titled"Angry Little Asian Girl, Five Angry Episodes" to festivals where they were well-reviewed by critics. Audience members came up to her after screenings saying that ALAG spoke for them and that they too had similar experiences growing up in America. She realized she had hit a nerve. She had a crazy idea to make a batch of t-shirts. She quickly sold out by word-of-mouth prompting her to launch a shop on the website www.angrylittleasiangirl.com in 1997. She packed the shirts herself and mailed the orders every morning from the neighborhood post office. She also kept shirts in the back of her station wagon with a cash box and a card table and sold shirts wherever she could. The shirts sold out many times over.

This experience of taking the shirts out on the road proved to be invaluable. She met many people, particularly females of all ages and ethnicities who responded to the anger that ALAG unleashed. She observed how women did not feel that they were allowed to be angry, but somehow, her character let them tap into their own anger in a funny and "harmless" way. During this time, people kept referring to the video as a "comic strip." Instead of correcting them, she took it as a suggestion and decided to expand ALAG to include other girls of different backgrounds and personalities. She took 2 years to teach herself how to draw comics with books checked out from the library.

During this trial and error time, she submitted her comic strips to syndicates in hopes of getting syndicated in newspapers. But after numerous rejection letters and realizing her work would never fit in the mainstream, she decided to buck the system and draw whatever she was inspired to. With the newly created characters, including Deborah the disenchanted princess, Maria the crazy little Latina, Wanda the fresh little soul sistah, and Xyla the gloomy girl, Lee turned it into a weekly comic strip self-published on her website www.angrylittlegirls.com. After finding her true voice, a publishing deal came quickly thereafter. In 2005, the first book of collected Angry Little Girls strips was published by Harry N. Abrams. Now, in 2008, Lee has 5 Angry Little Girls books published as well as numerous merchandise licensees.

She is also a film and television actress, with roles in the 1998 film Yellow and the 2002 film Better Luck Tomorrow. She was a series regular in the short-lived Sci Fi Channel series Tremors, and had a recurring guest role on NBC's Scrubs. 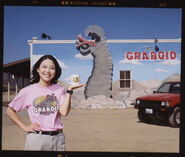 Lee on the set

Lee with the cast