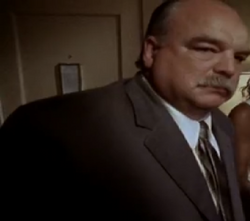 Helmut Krause was a scientist who appeared in the Tremors: The Series episode The Key. He had designed a sonic gun and he partnered with Delores and Frank to go to Perfection to try to recover a key that El Blanco had eaten. Delores had convinced him that they were going to double-cross Frank together & take the key themselves, only for her to double-cross him, using him as live bait for El Blanco. He died trying to reach the safety of some rocks as El Blanco swallowed him whole. Using the sonic gun they successfully stunned El Blanco and loaded him on the back of a truck.