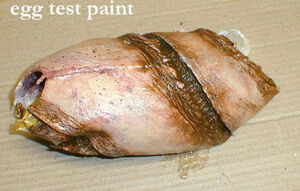 Similar to Sea Monkies, Tardigrades, and the Lung Fishes' ability to lie dormant, though the Graboids ability is far greater: the eggs can remain dormant for a time of 300 years. Since Graboid eggs can lie dormant for so long the shell can become fossilized in the process. The yolk however will remain concurrent. This allows the environment enough time to recover and provide enough food for the next generation of Graboids. For the eggs to awaken an outside heat source or sources need to be present as evidenced in Tremors 4: The Legend Begins when a hot spring was shown to have uncovered some eggs. It is not understood however how the Graboids of the previous two films were awakened though some fans think that the ones in Chiapas, Mexico were awakened by the drilling at the oil site due to the excess heat and seismic activity generated. It is believed that the eggs survive being eaten by other animals due to the stink that seems to be present in all of the Grabiod's life stages; this is supported by the fact that months after the creatures hatch the eggshells have not been disturbed (shown in the fourth movie, also these Graboid's shells were not fossilized). While it has not been confirmed, Graboid eggs seem to be laid in clutches of four by a single Ass Blaster, though considering the view given by Tremors 3: Back to Perfection this is hard to be substantiated. Another possibility is that the eggs are laid communally by Ass Blasters who migrate in groups over great distances, this technique would help to propagate the species.

History in the series

The only known pair of Graboid eggs (excusing those found in Tremors 4 that were destroyed and lost to the historical record) were discovered by Dr. Merliss. After Dr. Merliss was killed by Shriekers Jodi quietly "appropriated" it for the store. Desert Jack later convinced her the right thing to do was send it to the organization for which Dr. Merliss was doing his research. She cut them a good deal.

In Tremors: The Series, it is stated that scientists believe that the Graboids are in a hatching cycle, accounting for why so many eggs are suddenly hatching. Besides those seen in Perfection, Mexico and later Africa, single Graboid eggs are the only ones that tend to hatch.

In Tremors 5: Bloodlines, Burt and his son Travis Welker found a cave containing dozens of unhatched Graboid eggs protected by several existing Ass Blasters and two Graboids. It was shown that this African variant of the Graboid species was more interested in protecting these eggs and propagating the species then hunting. The two were unable to get close enough to destroy the eggs due to the Graboid and Ass Blaster defenses around them, but Burt managed to destroy them with long-distance fire from a helicopter's rocket pods. Following the destruction of the nest and the rest of the Graboids and Ass Blasters associated with it, the sole surviving Graboid focused its attention on getting the last remaining egg, found by a little girl in a nearby village. While baiting a trap to kill the Graboid with lightning, the egg was put on a pedestal to lure the Graboid in. The Graboid was killed by two lightning strikes and the egg was destroyed by a direct hit from another.