He was portrayed by the late Fred Ward.

Earl became a hired hand in the small desert valley town of Perfection, Nevada, working with partner Valentine McKee to eke out an almost entirely insignificant lifestyle. Though Valentine would've cringed at Earl's usage of the phrase "hired hands" ("Handymen, Earl! We are handy men!"), it was in truth what they were. Earl and Val constantly said that they were going to go somewhere and make a better life for themselves; they never actually did anything about it until one of Walter Chang's septic tanks blew up all over them in 1989.

Hightailing it out of Perfection, Earl and Val had the bad luck of running across some dead townsfolk, and once they got back to Perfection to give the heads up to its other residents, they discovered that what they were dealing with was far from ordinary. They attempted to make it up to Bixby (the nearest town to Perfection, 38 miles away) to alert the police, but the road was blocked by an avalanche caused by one of the monsters (which, of course were Graboids). Thus, they were commissioned against their will to take two of Walter's horses across the valley to try to reach the police until they were attacked by a Graboid and discovered how enormous they were.

Earl and Val met up with grad student Rhonda LeBeck after having killed the Graboid, and after staying all night on top of a boulder to avoid another of the creatures, they drove in Rhonda's pickup truck back into town where they rallied together with their fellow Perfectionites to kill the three remaining Graboids. Earl had plans of using the Graboid situation to take his big chance in life. He wanted recognition in National Geographic Magazine, he got a cover story in People magazine. Still, that was enough to raise national interest in the Graboids, and before you knew it, Earl and Val were in ads for Nike, Inc., there were Dark Horse comic books, and even an arcade game. However, it ended up that Earl, though he was co-discoverer and co-destroyer of the Graboids,in the end he got no residuals from any of the merchandise that used the Graboid likeness, and he found himself, in 1995, stuck back in Perfection ranching ostriches, Wildfire and Suzie .

However, things changed when Grady Hoover, a big Graboid enthusiast and admirer of Earl, showed up on his doorstep and offered him his big "second big chance" in life...to accompany him on a Graboid-hunting expedition for the Petro Maya oil company in Mexico. At first, Earl was reluctant; the horrors of his last encounter with the subterranean monsters returning at once, but eventually went along. While battling Graboids with Grady in Mexico, Earl met Dr. Kate Riley, the geologist working on the case for Petro Maya. This time there were thirty-six Graboids instead of only four, and they would get $50,000 apiece for each one killed. While there, Earl and Grady killed twenty-eight, which ended up totaling $1,400,000. During this process, Earl felt at some point that they needed reinforcements, so he called in Burt Gummer to join him.

While there, Earl and Grady bagged 28 Graboids at the tune of $50,000 apiece, which ended up totaling at the sweet sum of $1,400,000. The remaining eight Graboids turned into Shriekers, the second stage of the Graboid's biological life cycle, but Earl, Grady, and Burt killed every one of them. Earl and Grady also managed to talk the Mexican government into giving them money for each of the Shriekers, the second stage of the Graboid's biological life cycle, that they had managed to tag...considering the dozens upon dozens of Shriekers that they destroyed in a large explosion, one can only imagine how much more money they were awarded. Even if they did destroy the entire Petro Maya oil refinery though this did cost them a slight deduction to their fee.

After the situation in Mexico, Earl and Grady used their new found riches to operate a Graboid-themed amusement park (Grady and Earl's Monster World)...Earl's third big chance in life. While Earl was never seen again, it was revealed in the third film that the theme park had become a major success.

Earl and Kate got along very well, and eventually discovered that they really, really liked each other...and at a time of utmost desperation, when they were camped out on a roof to avoid the Shriekers, Earl realized that she had been Miss October 1974, the Playboy Playmate he had pinned up on his wall ("She's there to remind me not to keep chasing after things I'm never gonna get"). They fell in love and presumably got married. 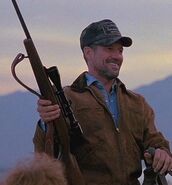 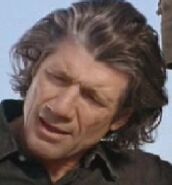 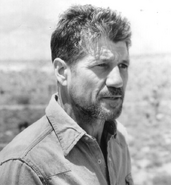 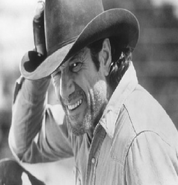 Earl in Tremors 2
Community content is available under CC-BY-SA unless otherwise noted.
Advertisement